Her Carnival of Dreams 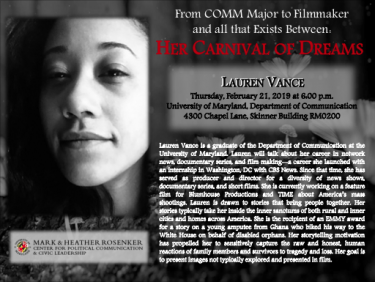 Speaker:
Lauren Vance is a graduate of the Department of Communication at the University of Maryland. During the lecture, Lauren spoke about her career in network news, documentary series, and film making–a career she launched with an internship in Washington, DC with CBS News. Lauren has served as producer and director for a diversity of news shows, documentary series, and short films. She spoke about her current project, a feature film for Blumhouse Productions and TIME about America’s mass shootings. Lauren is drawn to stories that bring people together. Her stories typically take her inside the inner sanctums of both rural and inner cities and homes across America. She is the recipient of an EMMY award for a story on a young amputee from Ghana who biked his way to the White House on behalf of disabled orphans. Her storytelling motivation has propelled her to sensitively capture the raw and honest, human reactions of family members and survivors to tragedy and loss. Her goal is to present images not typically explored and presented in film.