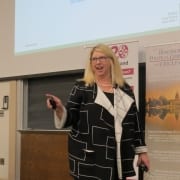 In this lecture, Ann Davison discussed the 2020 Census and the public relations and crisis management work her team at Guidehouse, a global consulting firm, has done to help the U.S. Census Bureau prepare for the 2020 Census.

Once every ten years the United States conducts a population count of every person living in the United States, requiring a massive communications campaign to educate and motivate people to respond. Communications and crisis management strategist Ann Davison shared insights into the effort to engage a highly diverse population, overcome deep mistrust of government in some communities, and dispel rumors and disinformation meant to subvert a complete and accurate count.

Ann Davison has an accomplished public and private sector career as a communications and public affairs advisor to elected officials, government and corporate executives, trade associations and nonprofit leaders. Ann currently serves as a Director with Guidehouse, a global consulting firm, where she leads a team providing public relations and crisis management counsel to the U.S. Census Bureau in preparation for the 2020 Census.

Ann spent 15 years of her career as a senior leader with two of the nation’s leading public relations firms.  As the Chair of the U.S. Public Affairs and Crisis Practice at Burson-Marsteller, Ann led an award-winning crisis management and reputation recovery campaign for first U.S. hospital to diagnose a patient with Ebola.

Ann’s 15 years of government service includes serving as an advisor to two U.S. Senators from Florida, the U.S. EPA Administrator and the Vice President of the United States.

Ann was joined by Burton Reist, the Census Bureau’s Assistant Director for Communications, Operations and Management.

His management responsibilities include overseeing the budget, and increasing the volume of the day-to-day interactions with the media and public through press releases and blogs. Burton is involved in day-to-day activities with oversight entities such as the Office of Inspector General and the Government Accountability Office. His duties also include providing oversight for the Public Information Office, the National Partnership Program and the Program Management Office. In all of these areas, he provides executive leadership for ensuring ongoing strategic communications for the 2020 Census Program.

Before rejoining the Census Bureau, Burton served as the director of External Affairs for the Economics and Statistics Administration (ESA) at the U.S. Department of Commerce and reported directly to ESA’s chief of staff. Mr. Reist managed all aspects of external affairs including public and interagency communications, and the coordination and oversight of outreach by the Bureau of Economic Analysis and the Census Bureau. He also directed communications regarding ESA’s mission, which included engaging a huge and diverse stakeholder community, and he was the designated federal official for the Commerce Department’s Data Advisory Council.

Mr. Reist is a senior leader and manager with decades of experience in the statistical and communications realm. He directed the 2010 Census communications campaign, and he has held several senior positions since his arrival at the Census Bureau in 1998. Before joining ESA, he was the Census Bureau’s chief of the 2020 Census Research and Planning Office, where he directed the research and testing program for the 2020 Census.

Mr. Reist, who lives on Capitol Hill in Washington D.C., has a bachelor’s degree in politics from the University of California at Santa Cruz, and a master’s degree in public administration from Cornell University. 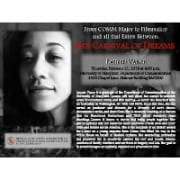 Lauren Vance is a graduate of the Department of Communication at the University of Maryland. During the lecture, Lauren spoke about her career in network news, documentary series, and film making–a career she launched with an internship in Washington, DC with CBS News. 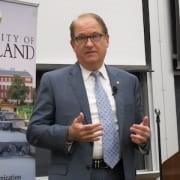