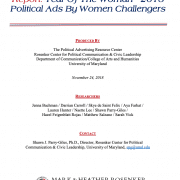 Summary: This report was produced by the Political Advertising Resource Center of the Rosenker Center for Political Communication and Civic Leadership at the University of Maryland. The report synthesizes an analysis of ads produced by women challengers running in the 2018 Mid-Term Elections. Researchers (Ph.D. students and a faculty member) studied the advertisements by women running for the U.S. House of Representatives, the U.S. Senate, and to serve as governors of their state. The ads produced by women challengers in our study reinforce the entrenched divide facing the country, especially relating to depictions of women’s equity, constituent diversity, and national unity. As irreconcilable as these divides seem, the ads also share more in common than many might expect, with a focus on the strength of the individual candidates, a valorization of the local community, and a belief in a flawed government. These commonalities, we posit, provide at least a glimmer of optimism amidst the deep-seated pessimism that pervades contemporary politics.

A summary of this report was published as an article in The Conversation on January 4, 2019. The article was republished by various new sources, including Salon, The San Francisco Chronicle/SFGate, and The Houston Chronicle. 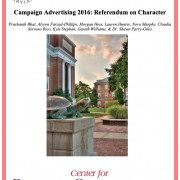 The Campaign Advertising 2016: Referendum on Character white paper was produced by the Political Advertising Resource Center at the University of Maryland. The report synthesizes a content analysis of the 2016 presidential candidates: Hillary Clinton and Donald Trump.